How to remove a defamatory Google review

One of the most frustrating aspects of Google reviews for business owners is that people can post defamation anonymously, without having to property identify themselves. This makes it difficult to prove to Google that the review you are complaining about is fake.

How to identify a fake Google review

How to prove that a Google review is fake

How to identify a fake Google review

Google fake reviews tend to have certain characteristics. It is helpful to look for the following signs, to assist you in identifying a fake Google user. Anonymous Google reviews are more likely to be fake reviews than Google reviews by a named user which you can recognise. A review by a Google user who posted a single review, which happened to be defamatory against your business, is also likely to be fake. A review by a Google user who has posted a small number of online reviews with very little geographic connection between them, and which had been posted within a short period of time is likely to be posted by someone who is not a real customer.

A competitor who posted a defamatory review against your business, is likely to have also posted a glowing review about his business. There are other factors that might indicate that a defamatory review is fake and you should consider each review in detail and in the context of other Google reviews that you business has received, as well as other reviews that the Google user had posted.

How to prove that a Google review is fake

If you suspect that a defamatory Google review against your business is fake, even if you present Google with evidence that indicates to Google that the review is fake, you might still be unable to convince Google to remove the review form your company’s listing. The next step would be to request that Google disclosure the identity of the Google user who posted the defamatory review. This is done through a request from the court for a disclosure order. The process is fairly straight forward, if your legal representative has already good working relationships with Google legal team. In most cases, there will be an agreed draft court, which the Google legal team has already given its blessing to, and which had been tested hundreds of times with the court. Often, when your lawyer sends the formal request to Google to commence the disclosure process, Google would take another look at the business review and might conclude that the review is indeed defamatory and therefore should be taken down. This would often be the end of the matter. In other cases, Google might write an email to the user who posted the defamatory review to tell them that your lawyer has started a disclosure process. In many cases, again, this would lead, one way or another, for the defamatory review to be taken down. However, if the review remains, your lawyer will proceed with the disclosure application, after which Google will supply your lawyer with personal data about the user who posted the defamatory review.

After you receive disclosure from Google about the user who posted the Google business defamation review, you might find that the Google user still remains anonymous. The only information that you might receive from Google is an email address that is not responding and a mobile telephone number which is connected to the Google user account. The next step would be to serve copies of the legal proceedings against the user and prepare to apply for a default judgment against him. 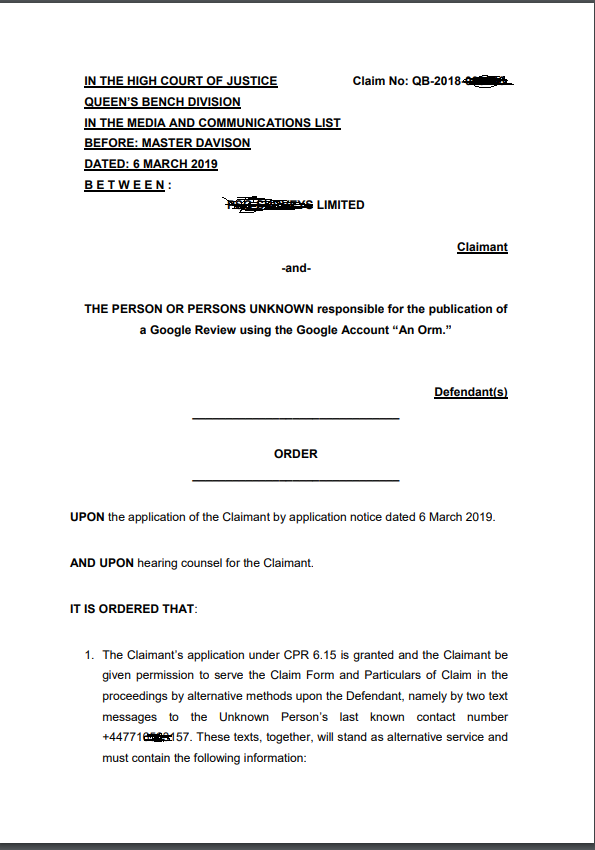 You may be able to apply for a default judgement against a user who posted Google business defamation, if the user hadn’t responded to you lawyer’s SMS message. This happens in pretty much every case where the only form of communication with a Google user is SMS. At this point, your lawyer will be able to apply for a default judgment against the use which they will then send to Google, who will take the review down.

In some cases, there are multiple fake, defamatory Google business reviews and often they can all be dealt with by your lawyer under the same process. It means that you will be able to cover more than one defamatory review in your disclosure application, and later on in your application for default judgement. It is very rare that matters go all the way to a default judgment because in most case, by the time your lawyer has obtained the disclosure of from Google, the defamatory reviews would have been deleted by either Google or the user who posted the review in the first place. 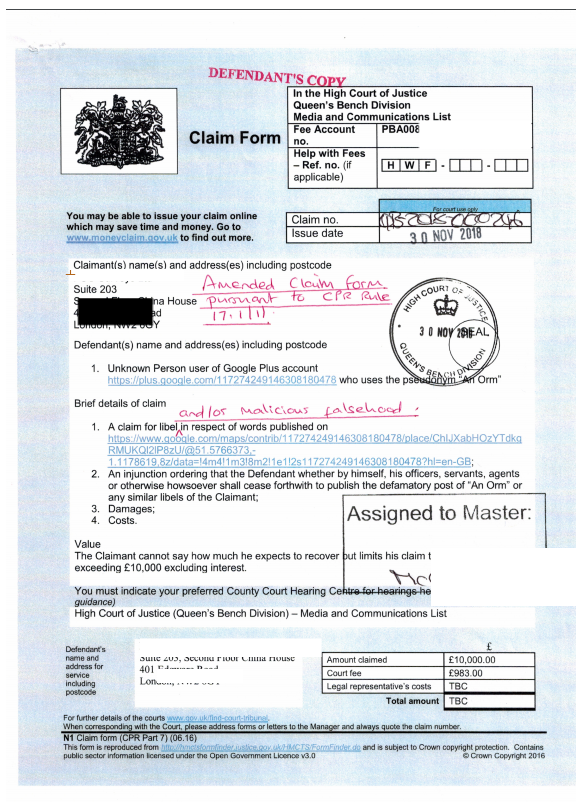