Defamation claim against the police

You might be able to sue the police for defamation if a police officer who is investigating a case against you, had made public her view that the allegations are true.

When can you sue the police for defamation

When can you sue the police for defamation

You may be able to sue the police for defamation in cases where the police had failed its duties of impartiality and confidentiality, by referring to the allegations against you as if they were facts. It is the duty of the police to remain objective when investigating criminal allegations. Police officers, however, sometimes may make public statements, during the course of the investigation, which may give the impression that the suspect is in fact guilty of the criminal offence the police officer is investigating. The publication could be made verbally or in writing and is often made to those who initiated the complaint. It is far more serious when the defamatory statement by the police is made in a letter which is sent to the complaint, because the complaint may then forward the letter or even publish it on the internet. A slander, which is a defamatory statement made verbally, might be recorded by the complainant and might then be made public. Police officers should therefore keep their opinions and pre-judgements to themselves and never share them with witnesses or the complainants. If the police fails in its duty to maintain confidentiality and objectivity through the investigation, this might lead to a defamation claim against the police by the suspect.

This is a case where the claimant who was being investigated by the police, successfully brought a defamation claim against the police, following comments made by the investigating officer about him in a letter to witnesses. Mr Suresh was represented by Yair Cohen of Cohen Davis on a no win no fee basis. The Claimant, Selvaratnam Suresh , was the Chairman of the Oriental Fine Arts Academy of London, a registered charity. He was a well-regarded community worker and a leader within the Tamil community in England and across Europe. Allegations were made to the police against the Claimant, that he committed fraud. Part of the alleged fraud was that he unlawfully altered an official charity document. Those were false allegations for which the Claimant successfully sued his accusers for defamation.

The Detective Sergeant, who investigated the allegations on behalf of the Metropolitan police wrote an email to the accusers where he said the Claimant abused his position as Chairman of the OFAAL by engaging in financial fraud within OFAAL over a number of years and across a number of countries to the detriment of the charity and the beneficiaries of its activities and work; and fraudulently and illegally altering OFAAL Constitution with the aim of committing financial fraud. The accusers then forwarded the email to an unknown number of people as proof that their false allegations against Mr Suresh had been substantiated.

The publication of the emails caused serious harm to the reputation of the Claimant. The publisher of the defamatory allegations was a person of high authority and apparent credibility. He was a Detective Sergeant of the Metropolitan Police. As such, recipients of the email would have reasonably expected a person of this position to make such allegations only where there was sufficient evidence to substantiate them. Following publication of the email, the Charity Commissioner conducted a special review by its Head of Operations where the conduct of both the Claimant and OFAAL were investigated. The review did not substantiate any of the allegations made by the police officer in his email. The Charity Commissioner wrote to the Detective Sergeant stating that she had seen no substantive evidence to support his allegations but invited him to provide her with any evidence of financial fraud. Sadly, in the meantime, the accusers published the defamatory email they received from the Detective Sergeant to the general public, fine arts students, fine arts institutions and other South Asian institutions who dealt with OFAAL and its clients in the UK and Europe. This was entirely predictable given these individuals where the very same people who held made false allegations against the Claimant. The defamatory email was published and republished to a very substantial number of people. 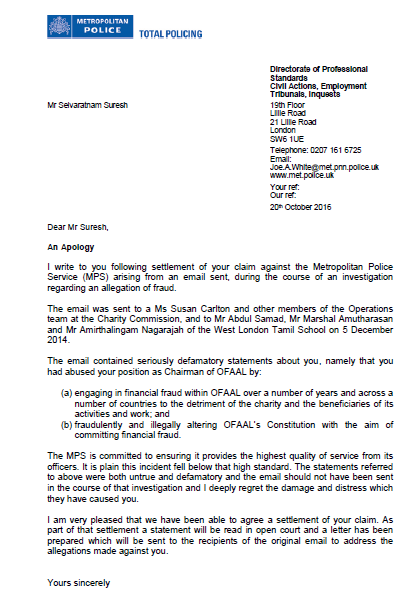 The Claimant relied on the ‘grapevine effect’ whereby a substantial, but necessarily unquantifiable, number of publishees and/or republishes of the email were likely to have repeated the allegations concerning him. Following the issuing of legal proceedings for defamation against the Metropolitan Police, Mr Suresh agreed to receive an undisclosed amount of damages and an apology in full and final settlement of the defamation case. The Metropolitan Police also agreed to pay Mr Suresh legal costs. Following the wide republication of the email, the Claimant and his family were inundated with telephone calls by persons who had either read the email or heard about the allegations ‘on the grapevine’. The fact that the email had been sent by a Detective Sergeant of the Metropolitan Police had naturally led many persons to believe that the allegations had been made following an investigation into a very serious criminal offence. Although the Claimant and his family insisted that he had done nothing wrong, many of the publishers remained concerned, particularly because they would not expect a Detective Sergeant of the Metropolitan Police to make such allegations without having strong evidence to substantiate them.

If you have been defamed by the police, seek immediate legal advice. It is important to take legal advice for defamation early for a number of reasons. First, this is likely to reduce the number of publications and in many cases stop them completely. Second, there is a limitation period of 12 months to take legal action for defamation, which means, after the lapse of a year, from the first date of publication of the defamation, you might be unable to bring legal action. Thirdly, there are some cases, such as the one of Selvaratnam Suresh v Commissioner of the Police of the Metropolis where you might be eligible for a no win no fee agreement, which means, you will only become liable to pay your legal costs if and when you win the defamation claim against the police.